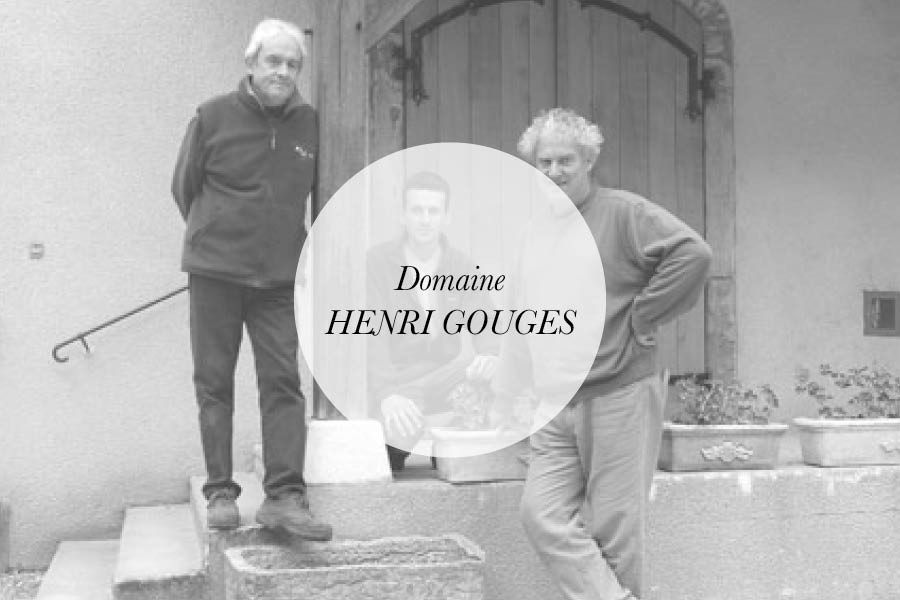 If domaines could be doyens, Gouges would be the doyen of the commune… the results are magnificent.

The Henri GOUGES domain was established in Nuits Saint Georges at the very beginning of this century. Founded by Henri Gouges, it was subsequently developed by his two sons, Michel and Marcel. Today it is Pierre, Christian and their successor, Grégor.

For nearly eighty years, the soil has soaked up the sweat of these enthusiasts on the fifteen hectares that make up the family domain.

Over three generations, the Henri Gouges domain has had the honour of appearing on many of the most respected tables in France and across the world.

What analogy can be drawn from the names “Chaignots”, “Pruliers”, “Clos des Porrets Saint-Georges”, or “Vaucrains”? Firstly, one that illustrates some of the most famous names from the Nuiton vineyard. Secondly, one that embodies the Gouges domain, one of the most beautiful selections of Grand Cru from the Côte d’Or.

Here, man takes root in the soil like the ancient vines he produces. Once, it was Henri, then Michel and Marcel, today it is Pierre, Christian and their successor, Grégory : for nearly eighty years, the soil has soaked up the sweat of these enthusiasts on the fifteen hectares that make up the family domain. Since the beginning of the century, all the work in the Gouges family can be summarised in the maxim : “it is whilst still on the vine that a fine wine matures…”

And what wine ! In addition to the Burgundy vineyards and the Nuits Village , the family dance card boasts some of the most impressive crowned heads, some of the finest jewels from the Côte of fine wine…

Welcome to a demanding domain of excellence where the vineyards can find a youthful expression, with all that means in exuberance and fruitiness, but equally an age-old character, with a great wealth of nuances, strength and concentration…

In a few words, the realisation of an arduous task of yield management, selection, quality. Here, the fruit must draw the most from the earth, it must express the best of the plant.

Vincent Mongeard, who is as passionate as is ancestors, is committed not only to maintain and improve the family patrimony, but also to expand it, when there is an opportunity, this to winden the variety of the Domaine.

The property accounts today for approximately 33 hectares, spread on 35 different appellations producing white Burgundy issued from the Chardonnay grape, but also essentially red wines issued from the Pinot Noir grape in the best climates of the Côte.
The vineyard is located in the mid-slope. Southeast orientation on a chalk and clay soils.

The village of Vosne Romanée entered in the Burgundy history in 636. It was at the beginning of the XVII century that we first noted the name "Mongeard" in the registry.

For more than eight generations, the Mongeard family has been established in Vosne Romanèe, right in the midst of the Côte de Nuits, producing wine with an utmost respect for tradition

Since then and threw all the generations, the family is committed to their passion: Vine and Wine.
The Domaine Mongeard-Mugneret, renamed since 1945, now operates a large vineyard in the purist of the burgundy tradition, My grand-father was Eugène Mongeard and my grand-mother Edmèe Mugneret.