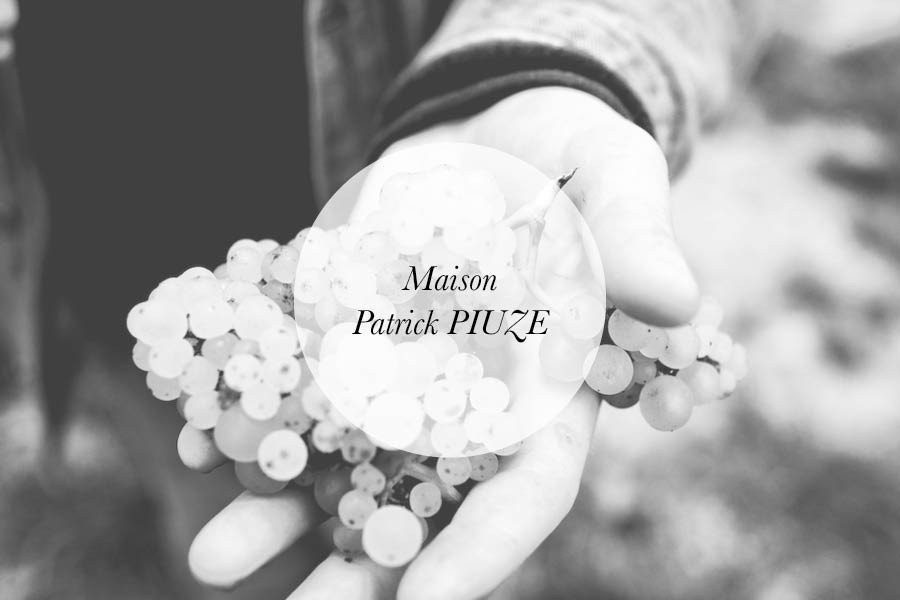 The only thing truly original in the world of wine is the underlying terroir and I have nothing else interesting to add. Anyone can copy anyone else’s techniques so what else is there to make great wines? I believe the answer is simple: Terroir. I want to work only with the fruit from old vines and even then, only old vines that are planted exclusively within the original boundaries of Chablis. If I respect these things, it will be almost impossible to make bad wine.

Patrick Piuze started to make a name for himself as an excellent winemaker and his fame led him to be recruited as a cellar master by Jean-Marc Brocard. At this time, Patrick took the most important decision of his life: he founded his own winery on July 1st, 2008. It was a real challenge to settle all by himself.

“Here is a truly thrilling new producer of hand-crafted Chablis, designed to showcase the individuality of different terroirs, not just at premier (and one grand) cru level, but within that very substantial area devoted to AC Chablis.”

“When I inquired as to how Patrick Puize was managing to make such fine wines with purchased fruit, Piuze explained that his experience with Verget and Brocard exposed him to the practices of the very best growers as well as their identities. He also forcefully forswears corrections of any kind, which includes chaptalization, enzymes, acidification as well as new wood (he uses 6 to 8 year old wood at present with some stainless, depending on the wine in question).

As Piuze puts it “The only thing truly original in the world of wine is the underlying terroir and I have nothing else interesting to add. Anyone can copy anyone else’s techniques so what else is there to make great wines? I believe the answer is simple: Terroir. I want to work only with the fruit from old vines and even then, only old vines that are planted exclusively within the original boundaries of Chablis. If I respect these things, it will be almost impossible to make bad wine.”

“What do Hunter Valley semillon, Santorini’s assyrtiko and France’s chablis have in common? No, smarty pants, it’s not that they are all white wines, each made from a single white grape. It’s that the quality of each
is 90 per cent the product of the place where the grapes are grown, 10 per cent
the skill of the winemaker.

The overarching theme is the matching of the variety with the terroir, using that term to embrace all the atmospheric and terrestrial attributes of the place. Santorini’s assyrtiko is grown on volcanic pumice and the vines are coiled fat on the ground, like a giant bird’s nest, to protect the canopy from the incessant hot winds of summer.

Hunter Valley semillon is also grown in a hot climate ameliorated by high humidity, faring best on sandy fats. Its unique bond with its terroir sees it picked with a potential alcohol of 10-10.5% alc/ vol. It shares relatively high acidity with assyrtiko, although the latter’s very low pH makes its acidity bitingly obvious.

The most valued terroir of Chablis, well north of Burgundy proper and hence cooler, is anchored in its mix of limestone and clay soil formed 170 million years ago by countless fossilised oyster shells and called kimmeridgian. All seven Grand Cru Chablis are situated on a single southwest-facing slope of kimmeridge and total a mere 100ha of vines. The style of chablis is severe and finty, far more so than burgundy, and oak plays a limited (if any) role. Patrick Piuze is a French Canadian sommelier who became a chablis winemaker after two vintages in Australia and produces chablis with startling clarity and knife-edge mouthfeel. He has the last word: “The only thing truly original in the world of wine is the underlying terroir.”

“The small town of Chablis in northern France is a magical place. Nestled close to regional capital Auxerre between Paris and Dijon, it is a town that exists only for wine. It is surrounded by vines and dotted with small, largely family owned wineries. Towering over its northern borders is the hill where its hallowed grand crus are located – a south-facing slope that traps the sun to produce the richest and longest-lived of the regions wines. While there is the odd bar, restaurant and hotel for travellers, Chablis retains its history despite its stellar international reputation and remains largely a working town dedicated to the vine.

In the late 1800s, wine was made throughout France, in many more towns and regions than it is found in today. But then disease struck and it was only the finest sites that were replanted — of which Chablis was one. The reason is its unique and complex soils; 180 million years ago, Chablis was located under the sea and when the water receded it left millions of oyster shells fossilised in pale limestone soils. Not only do those soils help to impart delicate flavours to the wines but they also give the chardonnays from
the area energy and elegance.

With Chablis’ long history of quality winemaking, it is a town where names such as Raveneau, Dauvissat, William Fevre and Billaud-Simon are treasured and their wines revered. But it is also not without its interlopers — outsiders who have made Chablis their home by buying small parcels of fruit to craft in their individual styles. Perhaps the most unlikely character of them all is French-Canadian Patrick Piuze.

Born into a middle-class Montreal family, where wine was never on the menu, Piuze was on a course to watchmaking when he discovered a love of wine, but it took a long time before he finally made Chablis his home. In fact, his first steps to a winemaking career were made in Victoria’s Grampians wine region.
It took a fateful meeting with Marc Chapoutier, of the famed Chapoutier Rhone valley vignerons, in Canadian ski town Banff to spark the start of Piuze’s long journey. Chapoutier put him in touch with his Australian contacts and soon Piuze was working on his first vintage with the well-respected late Trevor Mast at Mount Langi. This was followed by further experience with Ralph Fowler of Leconfield. “With Trevor I learned the love of wine and that with passion you make everything better,” he says. Piuze returned to Montreal to pursue a career away from the vine, as there was precious little winemaking in Canada. But a desire to return to it soon became overwhelming and he was again on the road — this time to Burgundy. From 2000 he gained valuable experience making chablis at leading firms such as Olivier Leflaive, La Maison Verget, under Jean-Marie Guffens, and finally with Jean-Marc Brocard in Chablis where he honed his skills in crafting exceptional cool-climate chardonnay. It was here that Piuze’s love of Chablis was cemented; he decided to make this small region his home and fashion the best wines he could from it. In Chablis he is classed as a micro-negociant, buying small quantities of fruit from select vineyard sites. He owns no vineyards, so strong relationships with his growers are keys to his success.

I first met Piuze in the summer of 2009, tasting through a row of small tanks from the first vintage under his own label. Already the wines showed immense class; they were full of vitality and with more-ish, beautifully defined Chablis characters. I bought a case and it was gone in a week. The current releases from 2012 are in a very similar mould — bright, pristine, powerful yet elegant styles with any oak well and truly”

Born in January 1973 in Quebec, Canada, Patrick Piuze is the third son of a middle class family who was never marked out to wine-producing.
When he turned eighteen, Patrick met Marc Chapoutier who were a real springboard towards his professional life and helped him to get started in wine-producing.

Thanks to him, Patrick travelled all over the world and worked in several wineries in Australia, South Africa and Israel. Then, he went back to Quebec and started up a wine bar called "Le Pinot Noir" in the center of Montreal.

His two-year experience in catering and wine waiting helped him to create a certain culture of wine-tasting there but deep inside, all he wanted was going back to his beloved wineries and cellars.

In the summer of 2000, Patrick left Montreal and carried his backpack to Burgundy, one of the most beautiful regions in France. He joined Olivier Leflaive and his staff in Puligny-Montrachet for the harvest season. After a short course at the Beaune CFPPA (Centre de Formation Professionnelle et de Promotion Agricole), he was entrusted with Olivier Leflaive’s Chablis winemaking. There, he developed his savoir-faire and then left Olivier Leflaive’s winery four years later for La Maison Verget, where Jean-Marie Guffens passed him his passion for terroir.

Patrick Piuze then started to make a name for himself as an excellent winemaker. His fame led him to be recruited a year later as a cellar master by Jean-Marc Brocard. At this time, Patrick took the most important decision of his life : he founded his own winery on July 1rst, 2008. It was a real challenge to settle all by himself.

Patrick’s main intention is to make a real difference between "wine grower" and "winemaker". He doesn’t own any vineyard but has a strong influence as a counsellor for the wine growers. He established a trust building approach and a long-term partnership towards wine growers. This philosophy enables him to pick the best lots in Chablis, most of them of very old vineyards, to collect high quality grapes. He mainly purchases grapes and provides a varied wine range from Chablis (four different vineyards) to Grands Crus (six references, among which Les Preuses and Grenouilles) and eleven Premiers Crus. Thus, 110.000 bottles has been produced.

Through his wines, Patrick Piuze has always been intent on revealing the true character of Chablis and its wide-ranging terroirs and vineyards.